Former Elite Ensemble student Teresa Palmer was destined to be famous says agent Richard Laidlaw "I knew when I put her forward for Power Ranges and she narrowly missed winning a role she was destined for fame." However it wasn't long before he would get her an opportunity to audition again where Teresa would nail the audition winning a supporting role on DECEMBER BOYS opposite Daniel Radcliff (Harry Potter) launching her internationally. This was immediately followed by a lead role in the international box office hit 2:37, these two roles changing her life for ever. "I remember negotiating these deals was no easy task, as the producers had so many actors to choose from, however with a bit of negotiation I secured contracts in both these films for her" says Richard Laidlaw. Former Elite Ensemble student accepted into NIDA. Whilst attending Elite classes Whitney won a role in the feature film "Roadman" as well as a role in a Musical which toured to Singapore. Since graduating from NIDA Whitney has featured in TV movie 'Progeny', TV series 'It's a Date' and most recently landed roles in films 'THe Screaming Silent' and 'The Tellers'. Former Actors Ink student is another of our success stories. Although not for acting “yet” Lauren has developed quite a career for herself as a model.

She was discovered whilst working in a hotel in Sydney by Model Agent Chelsea Bonner, since then she has worked with some of the big names in the industry such as Peter Morrissey, Myer, David Jones, Madison magazine, Vanity Fair and is the first fuller figure model to create such a positive stir in the media and becoming an inspiration to women around Australia. Maksimovic has worked with stars such as Jennifer Hawkins, Erin McNaught and Lara Bingle and has just been named the face of new label Virtu. Former Actors Ink student accepted into Victorian College of the Arts. He has since landed several guest roles including Rush, Neighbours, Underbelly and Mrs. Biggs. Tim has also worked for some of Australia's most reputable theatre companies, including Red Stitch and The Melbourne Theatre Company (MTC) - with lead roles in both Hamlet and Return to Earth. Former Actors Ink student accepted into Flinders Drama Centre. Chris has gone on to star in State Theatre shows and TV Shows including 'House Husbands'. 'Miss Fisher's Murder Mysteries' and 'Danger 5'. Chris has also appeared in films 'I Rot', 'Swerve' and 'The Dating Scene' Most recently, Chris has been wowing audiences in Las Vegas as part of an all male Revue. 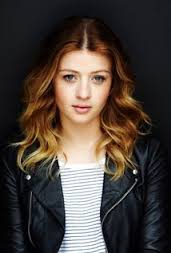 Sara was an outstanding student at Actors Ink quickly winning a position in the Elite Ensemble. Sara’s talents were not just limited to acting but also writing. Sara went onto study drama full time at Flinders University graduating in 2010 with a Bachelor of Creative Arts - Drama [Honors]. Since graduating Sara has won roles in Anzac Girls, One Eyed Girl, The Boy Next Door and many more. Check out her IMDb profile.

Sara’s talents were not just limited to acting but also writing. Sara went onto study drama full time at Flinders University graduating in 2010 with a Bachelor of Creative Arts - Drama [Honors].

Since graduating Sara has won roles in Anzac Girls, One Eyed Girl, The Boy Next Door and many more. Check out her IMDb profile.

A former Elite Ensemble student Phoebe has gone on to study journalism and become a television reporter for channel 10. A former political reporter and now currently based in England she is now the channel 10 European correspondent.

Eleanor quickly moved through the classes moving into Elite Ensemble graduating and then being accepted by NIDA. Graduating in 2013 she was awarded The Australian Voice Association’s Student Encouragement Award. Eleanor is a regular performer with Improv Theatre Sydney and has worked on both screen and stage, including with some of Australia’s leading theatre companies including including the State Theatre Company of South Australia’s critically acclaimed Neighbourhood Watch alongside Miriam Margolyes.

Nescha attended classes at Actors Ink working her way through the classes before making it to the Elite ensemble and then being accepted at Flinders University where she graduated from the Drama Centre Directing course in 2010 with Honours and a University Medal. She has gone onto be resident director for State Theatre company of South Australia before going on to work on exciting projects with the likes of Country Arts SA.

Benjamin attended the Actors Ink adult classes before successfully auditionaing and gaining a place in the AC Arts Diploma of Dramatic Arts course.
Benjamin graduated fgrom AC Arts in 2020 and is now a professionally trained actor.

It was obvious when Clement was attending the Adult classes at Actors Ink he had something special. After attending the  classes he was encouraged to audition for a place in the AC Arts Diploma of Dramatic Arts course where he graduated in 2020